David Larkin became aware of an auction at an abattoir in Orange. The abattoir had closed and all buildings and fittings were up for sale.

The building of interest was a sheep lair age. 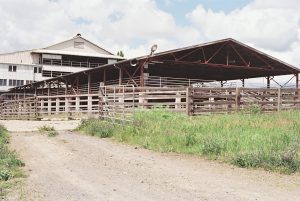 We arrived within minutes of the building coming up for auction.

Nelson McIntosh bid on the building.

The auctioneer stated the bid was with him.

This didn’t satisfy the other bidder and the building was knocked down to Nelson at $27,500.

The losing bidder came up to us after the auction and expressed an interest in buying the building. He was interested in the building for compost manufacture.

The building was steel framed and measured 63 m x 18 m. and was separated from other buildings except at one end where there was access into the abattoir proper.

Its purpose was as sheep lair age and had a timber slatted floor throughout. In addition there were pipe sheep yards throughout the building.

The floor was elevated on concrete piers ranging in height up to about 2.5 m above a concrete floor below. Sheep manure could fall through the slatted floor to the concrete below.

Timber floor framing was all in hardwood and in sound condition and this was a significant value item in the structure.

In the period following the auction there were a number of meetings to organise dismantling of the building.
The Sports Park user groups were involved in the relocation.  Tennis, Cricket, Scouts were requested to organise a number of representatives from their group.

My recollection was that there were around thirty who attended?
The list of those attending Orange for the dismantling of the building. 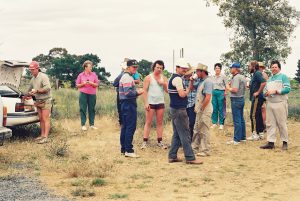 We investigated bus transport to Orange but this appeared expensive. In the end it was decided to travel using a number of private cars.

Local business’s volunteered the use of their trucks as shown below:

We had photos but were not really aware of what we would need but it was obvious a crane was required and most of the dismantling would require air operated impact wrenches.

Arrangements were made for the hire of a large capacity air compressor and crane through Orange based companies.

At the time of the auction we were approached by a member of the police in Orange who was interested in obtaining some of the slatted floor of the building.

Early on we had decided that it would be difficult to retrieve the slatted floor but we required the bearers and joists supporting the slatted floor so the floor timber would have to be removed by the quickest and safest method.

The roof was nailed in place with conventional roof nails.

One of the challenges was to remove the roof with minimal damage as it was one of the major components that had to be reused.

We became aware of an old roof nail removing tool shown to us by one of the local plumbers.

In the couple of weeks leading up to the trip we bought most of the available jemmies around Albury Wodonga and spent a couple of weekends making up six of the units.

Trucks were volunteered by those mentioned above. Council was to compensate for fuel.

We weren’t completely clear on all the details of how the building would be dismantled including bolt sizes, how the floor would come up and the like.

Council provided an order book and a few hundred dollars in cash for food, minor tools and the like.

It was intended to get started and then be able to go into Orange to buy whatever else was needed.

Most left Yackandandah about 6.00 pm on the Friday evening after work and arrived at Orange about midnight.

Accommodation mentioned previously as arranged by the local police person was an army reserve drill hall which was virtually made available for the whole weekend and included showers and all facilities for the cost of a donation to their mess fund.

The roof was removed from the whole building with no damage using the tools mentioned above before lunch on the first day.

Due to the amount of paint on the bolts virtually all bolts had to be “rattled” off for the whole length of the thread. This required two people for most bolts due to the awkwardness of the location and the need to hold the other end of the bolt against the impact wrench. 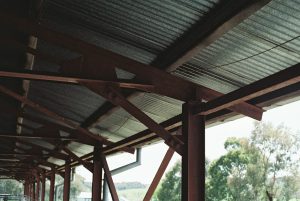 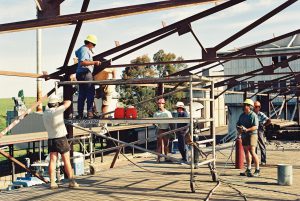 The floor was nailed down with gun nails most of which had some rust – enough to hold well in the timber. The floor had to be barred up with crow or jemmies or broken out with sledge hammers – all hard manual work.